As of 4/22/11, All future posts will be made at our new and improved site TYLERMFA.COM
The new site has tons of new features, a striking new look, and a greater level of interactivity. Please update your bookmarks! 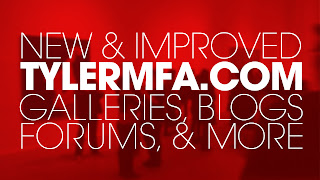 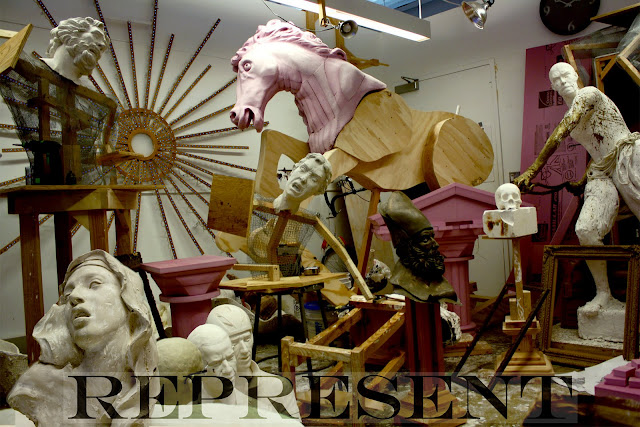 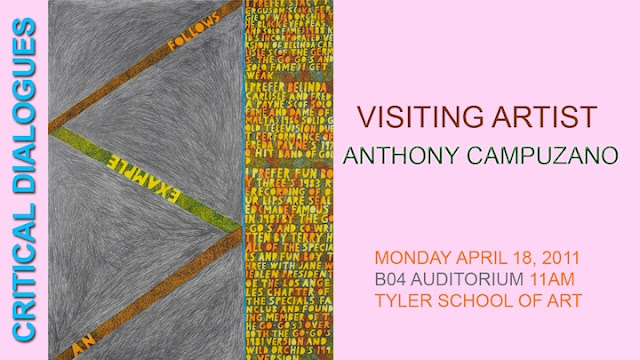 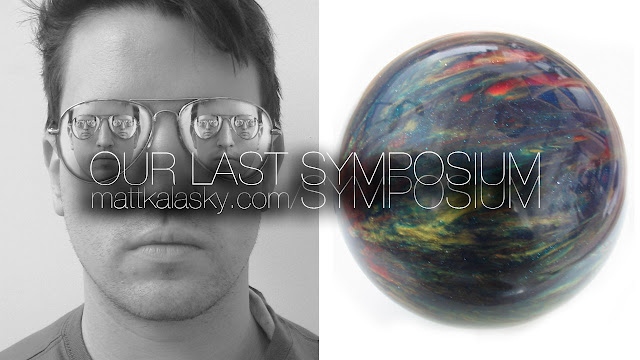 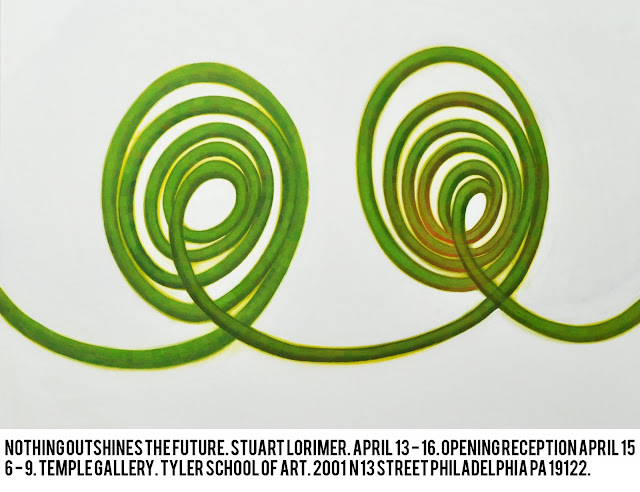 Victory for Tyler: Works on Paper and Posters 2011
Crane Arts Building Icebox Project Space, Philadelphia
April 7 - May 1, 2011
Opening Reception April 9th, 2011
The third installment of the Tyler School of Art: Temple University Alumni Exhibition Series. Began in 2007 with a focus on Painting and in 2009 with a focus on Sculpture, the third exhibition will focus on Works on Paper, divided into two categories, Works on Paper and Posters. Robert Storr, Dean of the Yale School of Art served as the juror for the Works on Paper. Mr. Storr was the Rosalie Solow Professor of Modern Art at the Institute of Fine Arts at New York University. In the spring of 2007 he directed the 2007 Venice Biennale, the first American invited to assume that position. Luba Lukova served as the juror for Posters. She is an internationally recognized New York based artist, and is regarded as one of the most distinctive image-makers working today. Ms. Lukova’s work is included in the permanent collections of the Museum of Modern Art, New York; Library of Congress, Washington, DC; and Bibliotheque nationale de France.
http://www.cranearts.com/?p=2929
http://www.temple.edu/tyler/blast/victory2011.html 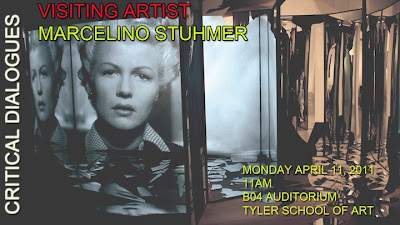 Marcelino Stuhmer
In Marcelino Stuhmer's recent studio work, he focuses on the nexus point where the function and structure of narrative appropriation and allegory coincide with architectural references from the history of cinema. He is fascinated with the way that history is interpreted through painting, film, television, and news media images, and how analyzing these diverse forms as spatial and temporal representations can alter the narratives, which are ultimately read. Stuhmer has done residencies at Skowhegan, and at the Rijksakademie in Amsterdam where he received a two-year research fellowship. His work has been exhibited internationally, including solo exhibitions at Optica Center for Contemporary Art in Montreal, Essl Museum of the Present in Vienna and group exhibitions at the Gemeentemuseum in The Hague, and Art in General in New York City. Solo projects include Little Triggers in the Playstation at Galerie Fons Welters in Amsterdam, Transmission of Conflict at Galerie Kusseneers in Antwerp, and The Recurring Dream at The Chicago Cultural Center. His most recent installation project Get Ready to Shoot Yourself at the Jade Art Gallery in Bergamo, Italy was organized by Sara Mazzocchi, cinema curator from GAMeC in Bergamo. He has won the Royal Prize for Painting in The Netherlands, a Mondrian International Publication and Exhibition Grant, a CAAP Grant from Chicago, a Joan Mitchell award in conjunction with an artist residency at the Atlantic Center for the Arts in New Smyrna Beach, Florida, as well as two Faculty Development Awards and a Dean's Faculty Award for Research, both at UW-Milwaukee. 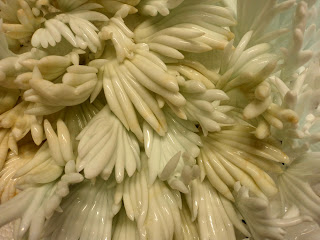 Peak and Valley runs April 6-9 in The Temple Gallery at Tyler School of Art. Opening reception Friday April 8, 6-9. Also showing are MFA's Dan Schein and Giles Hefferan.
by Grads 2011 at 12:44 AM 2 comments: 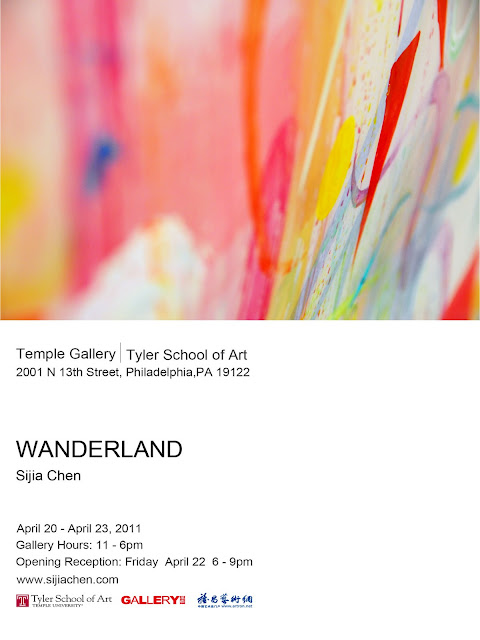 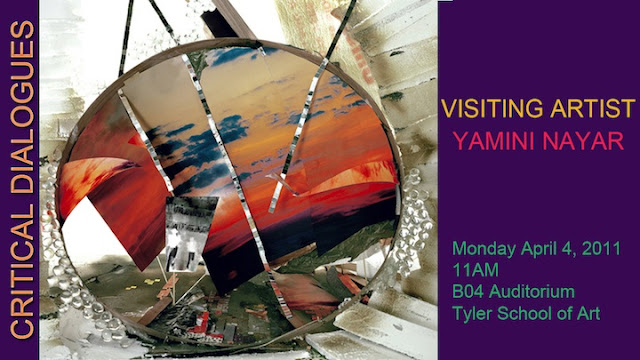 The act of consuming is a factor in each of our daily lives - from our first sip of coffee in the morning to turning off the lights at night. Patterns of Consumption is an exhibition of contemporary artworks that explore consumer culture, drawing from a visual vocabulary of craft-based materials, forms, and techniques. “Consumption” has multiple meanings here, referencing the economic exchange of merchandise, the use of fuel, and the ingestion of food and drink. Likewise, “pattern” references patterns used in forming and decorating art and objects, as well as patterns within economies. The resulting installation is a conversation between past and present.

Curator Heather Gibson, a design historian, chose contemporary artworks that resonate with the past. “Each of these artists,” notes Gibson “possesses a strong command of their chosen medium – clay, metal, and plaster bas relief. Their contemporary ideas are informed by their understanding of material, and how that material has been used historically.” The result is a richly layered commentary on how civilized society uses material goods, energy, food and drink.

Heather Gibson teaches History of Modern Craft and Design at the Tyler School of Art. She also serves as Adjunct Assistant Professor at Drexel University and Research Assistant at the Philadelphia Museum of Art.

Related event:
Art History lecture “The Art of Politics” on the intertwined history of ceramics and politics by artist Michelle Erickson to be held April 6th at 3:30pm in Tyler School of Art room B004.

Exhibition web site:
patternsofconsumption.com
by Grads 2011 at 8:08 AM 1 comment: 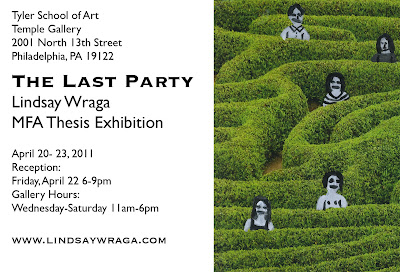