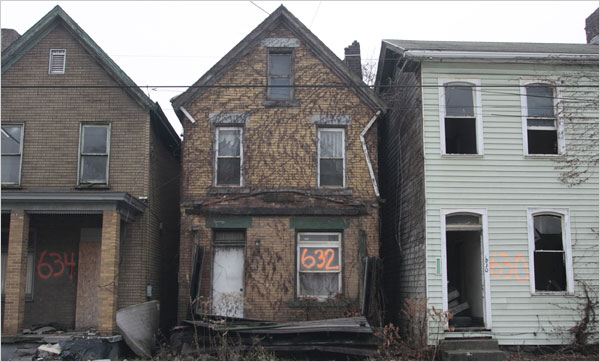 The state has deemed Braddock, Pa., a “distressed municipality.”

BRADDOCK, Pa. — As Americans wonder just how horrible the economy will become, this tiny steel town offers a perverse message of hope: Things cannot possibly get any worse than they are here.

The mayor, John Fetterman, below, with tattoos of the dates of killings during his time in office. 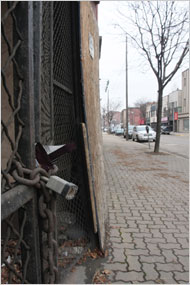 Now it has 3,000 and is full of abandoned buildings.

The Carrie Furnace, on the riverbank, operated until 1982.

Hunched on the eastern edge of the Monongahela River only a few miles from bustling Pittsburgh, Braddock is a mix of boarded-up storefronts, houses in advanced stages of collapse and vacant lots.

The state has classified it a “distressed municipality” — bankrupt, more or less — since the Reagan administration. The tax base is gone. So are most of the residents. The population, about 18,000 after World War II, has declined to less than 3,000. Many of those who remain are unemployed. Real estate prices fell 50 percent in the last year.

“Everyone in the country is asking, ‘Where’s the bottom?’ ” said the mayor, John Fetterman. “I think we’ve found it.”

Mr. Fetterman is trying to make an asset out of his town’s lack of assets, calling it “a laboratory for solutions to all these maladies starting to knock on the door of every community.” One of his first acts after being elected mayor in 2005 was to set up, at his own expense, a Web site to publicize Braddock — if you can call pictures of buildings destroyed by neglect and vandals a form of promotion.

He has encouraged the development of urban farms on empty lots, which employ area youths and feed the community. He started a nonprofit organization to save a handful of properties.

In an earlier era, Braddock was a famed wellspring of industrial might. The steel baron Andrew Carnegie put his first mill in the town, the foundation of an empire that helped build modern America. With the loot and guilt Mr. Carnegie piled up, he also built a library here, the first of more than 1,500 Carnegie libraries in the United States.

Immigrants came to work in the mill, and through ceaseless agitation won union representation that enabled their children — helped by the library on the hill — to achieve a better life.

A local boy, Thomas Bell, celebrated this hard-won success in his autobiographical 1941 novel “Out of This Furnace.” The story recounts the strivings of three generations in Braddock’s mill and their transformation from exploited and maligned “Hunkies” from Eastern Europe into full-fledged Americans.

This year, the town will be featured in the film version of another work of art, Cormac McCarthy’s Pulitzer Prize-winning novel “The Road.” Set in a post-Armageddon America where food is so scarce that many survivors turned to cannibalism, “The Road” was shot partially in Braddock.

A town whose story has evolved from building America to making Americans to eating Americans for dinner might seem a hard sell. So Mr. Fetterman, who is paid $150 a month, also promotes Braddock as a place to buy extremely cheap real estate.

Erik and Shannon Gustafson heeded that call. The couple were living in Chicago, where Mr. Gustafson was a part-time commodities trader, when they heard about Braddock last winter. They settled on a two-bedroom house whose owner warned them that it had black mold and was probably a tear-down. Her price: $4,750.

The Gustafsons paid the money and discovered that the mold problem was overstated. “Space is cheap here,” said Mr. Gustafson, 30. “We can afford to focus on our hobbies.” He is a graphic designer; she is a photographer.

Joel Rice, a furniture maker, bought a 15,000-square-foot former car dealership that he is converting to a showroom, workshop and home, with a greenhouse on the roof. The building cost $70,000, perhaps a tenth of what he would have had to pay for a tiny shop in Oregon, where he was living.

It will take at least two more years to clear the debris and put in new wiring, plumbing and fixtures. But Mr. Rice, 38, is undaunted. “If all our effort here crashes and burns,” he said, “it won’t be because we held anything back.”

Unlike many stricken steel towns, Braddock never lost its mill. Part of the U.S. Steel system, it still employs nearly a thousand workers. But they no longer live in town, and the stores followed them to the suburbs. Eventually, only the stubborn and those without resources remained.

“Even the bars and liquor stores closed,” said Ron Kutnansky, who was born in Braddock in 1953 and lived there and in North Braddock for decades.

A custodian at the University of Pittsburgh, Mr. Kutnansky finally moved out three years ago, after his home was broken into for the third time. “It’s a fairly big shame what happened to Braddock,” he said. He sold his house for a dollar, no regrets.

As Mr. Kutnansky was leaving, a political novice was starting to shake things up. Mr. Fetterman, now 39, is hard to miss, at 6-foot-8 and 325 pounds, with a shaved head and goatee. He has a master’s degree in public policy from Harvard but came to Braddock in 2001 to work for a county youth program. He won the May 2005 Democratic primary by exactly one vote. (He faced no opposition in the general election.)

The mayor wears his commitment to Braddock not on his sleeve but under it: On his right arm are tattooed five dates memorializing killings in Braddock during his time in office. The victims included a man delivering a pizza and a 2-year-old girl who was assaulted and then dropped into a snow-covered playground. She froze to death while trying to walk home.

This impressed many of the younger residents. “I was shocked, because he’s not even from around here,” said Jeremy Cannon, 23.

Mr. Fetterman’s official powers are limited, partly because of Braddock’s “distressed municipality” status and partly because it is technically a borough overseen by a borough council. The council president, Jesse Brown, did not return telephone calls for an interview.

Mostly, the mayor offers encouragement, ideas and energy. With the financial help of his father, who owns a commercial insurance agency in York, Pa., he also makes direct and indirect investments in local real estate. He set up the nonprofit organization, Braddock Redux, and gave it $50,000 to buy a former Presbyterian church to serve as a community center.

Last year, Mr. Fetterman gave the organization another $12,000 — money he says he got by draining his 401(k) — to buy a duplex and another house next door. The next step was securing a grant from the Buhl Foundation in Pittsburgh to refurbish the buildings for six at-risk teenagers who, at 18, were too old for foster care. Run by two members of AmeriCorps, the group house will open this month.

“Where a lot of people would see a series of negatives — a bankrupt community with deteriorating housing, foster kids aging out of the system and confronting a lack of employment — John saw potential,” said Frederick Thieman, president of the Buhl Foundation.

One of Mr. Fetterman’s biggest coups was persuading a small alternative energy company, Fossil Free Fuel, to secure a warehouse on Braddock Avenue.

“This is a very welcoming place for a business, because it has so few,” said Fossil Free’s co-owner, David Rosenstraus.

All this is movement in the right direction, but the uninhabited buildings are still falling down. Dozens are scheduled for demolition. “If struggling communities don’t preserve their architecture,” Mr. Fetterman said, “there’s no chance of any resurgence down the line.” Sometime soon, he worries, Braddock will pass the point of no return.