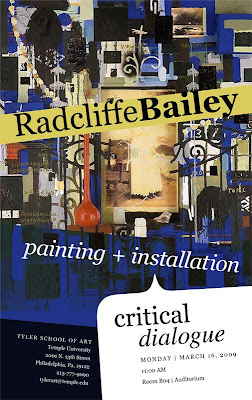 11:00am Room B04 Auditorium Downstairs

Radcliffe Bailey was born in 1968 in Bridgeton, NJ. He grew up in Atlanta, earning a BFA from the Atlanta College of Art in 1991. In 2004, Bailey received a Joan Mitchell Foundation Grant. In 2006, he was a visiting faculty member at Skowheagan School of Painting and Sculpture. This year, in 2008, the artist created large-scale glass works while participating in the Toledo Museum of Art’s Guest Artist Pavilion Project (GAPP). From 2001 to 2006, Bailey taught at the Lamar Dodd School of Art at the University of Georgia. His art is represented in many museum collections including the Metropolitan Museum of Art, the Smithsonian, San Francisco Museum of Art, Corcoran Gallery of Art, Museum of Fine Arts, Houston, Nelson-Atkins Museum, Kansas City, Harvard University Art Collection, Art Institute of Chicago, Birmingham Museum of Art, Mint Museum of Art, Norton Museum of Art, and in Atlanta at Hammonds House, MoCA Ga, and the High Museum of Art. In 1994, his work was included in “The Hale Woodruff Memorial Exhibition” at The Studio Museum of Harlem. In 1996, Bailey gained acclaim for his large-scale mural, Saints, commissioned by Atlanta’s Hartsfield-Jackson International Airport for the summer Olympics. “Radcliffe Bailey: The Magic City” (2001), presented at the Birmingham Museum of Art, and Blaffer Gallery, University of Houston, is his most notable solo museum show to date. Other solo exhibitions have been presented at Clark Atlanta University, Rhodes College, Memphis, Cheekwood Museum, Nashville, and Jacksonville Museum of Modern Art, Florida. Bailey’s work was included in the traveling exhibition, “Black President: The Art and Legacy of Fela Anikulapo-Kuti.” Other notable group shows include presentations at Emory University, and the Contemporary Arts Center, Cincinnati. Currently, his large-scale sculptural work, “Storm at Sea,” is part of “NeoHooDoo: Art for a Forgotten Faith,” curated by Franklin Sirmans at the Menil Collection, Houston, 2008.